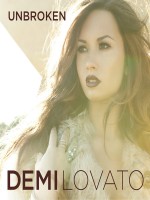 Unbroken is the upcoming third studio album by American singer, songwriter Demi Lovato. The album is set to release on September 20, 2011 by Hollywood Records. The lead single, "Skyscraper" was released on July 12, 2011.
Demi Lovato described the album as "more mature" than their previous sound and more fun and light than her first single, "Skyscraper", while other tracks are more intense.