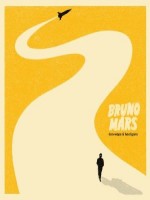 Doo-Wops & Hooligans is the debut studio album by American singer-songwriter Bruno Mars, released on October 4, 2010. Mars' writing and production team The Smeezingtons were credited with writing all songs and serve as the album's executive producers. Doo-Wops & Hooligans charted at number three on the Billboard 200 and in the top ten in Australia, Canada, Ireland, and New Zealand. Its title refers to doo-wop music and was chosen to reflect simplicity, as well as appeal to both males and females.
The usage of a wide variety of influences was noted by critics, with musical comparisons made to Michael Jackson and Jason Mraz. Many praised the songs' catchy nature, as well as their carefree lyrics. Two digital singles - "Liquor Store Blues" featuring Damian Marley and "Grenade"- were released to promote the album. Lead single "Just the Way You Are" was released on July 19, 2010 and topped the Billboard Hot 100 for four consecutive weeks, going on to become an international top ten hit. "Grenade" was later announced as the second single, and has charted in the top ten in Australia, Canada, New Zealand, as well as becoming his second consecutive number one in the US and UK. A US headlining tour accompanies the album, and ran from November to December 2010.