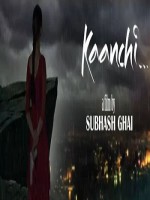 Kaanchi will be released on 15 Aug, 2013. It will have Rishi Kapoor in lead. Lyrics will be written by Irshad Kamil.