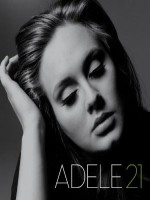 21 is the second studio album by British singer-songwriter Adele. The album was released on 21 January 2011 in the UK and most of Europe, and on 22 February 2011 in North America. The follow-up to her 2008 debut 19, 21 was named after the age of the singer at the time of its production. While it relies heavily on the folk and Motown influences that framed her debut, the album also explores various genres and styles from country and blues to alternative, indie-rock, and R&B. 21 is a break-up album, with the majority of the songs focusing on aspects of the singer's most recently ended relationship.
21 features production from Rick Rubin, Paul Epworth, and Ryan Tedder among others, and was released to critical acclaim, with reviewers lauding Adele's vocal performance and introspective songwriting. Preceded by lead single "Rolling in the Deep", the album debuted at number one on the UK Album Chart, selling 208,000 copies, as well as debuting at number one in over ten countries, including Canada, Germany and Ireland. It also debuted at number one on the U.S. Billboard 200 Chart with sales of 352,000 copies.