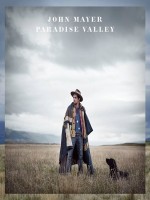 Paradise Valley is the sixth studio album by American musician John Mayer that was released on 8.13.13.