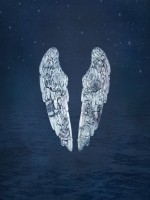 Ghost Stories is the sixth studio album by British rock band Coldplay. The album, co-produced by the band with Paul Epworth along with returning Mylo Xyloto producers Daniel Green, and Rik Simpson, was released by Parlophone on 16 May 2014. The album was released by Atlantic Records in North America on 19 May 2014. It is the first full-length release by the band in North America under Atlantic, after Coldplay were transferred from Capitol Records in 2013, following the purchase of EMI and its assets by the Universal Music Group in 2012.