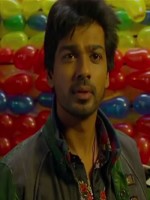 Tamanchey - All Songs, Lyrics and Videos. The film is directed by Navneet Behal and produced by Suryaveer Singh Bhullar. It stars Nikhil Dwivedi as Munna and Richa Chadda as Babu.

Music Director is composed by Krsna with additional music by Arko Pravo Mukherjee, "Pyar Mein Dil Pe" will be first single to be released from Tamanchey and it was originally composed By leagendary music director Rahul Dev Burman aka RD Burman.