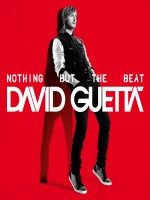 "Nothing But the Beat" is the fifth studio album David Guetta. The album will be released on from 26 August 2011 through Virgin Records (EMI Music). Released as a double album, the first disc features collaborations with artists from the R&B, hip hop and pop workd such as Lil Wayne, Usher, Jennifer Hudson, Jessie J and Sia Furler. Also making appearances are will.i.am and Akon, both of whom previously collaborated with Guetta on his fourth album, One Love. In comparison, the second disc features purely instrumental tracks