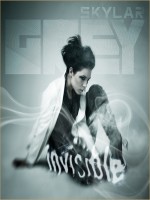 Invinsible is the upcoming album by American singer-songwriter Skylar Grey, set to be released in the fall of 2011 Recorded in 2010 and 2011, the album was entirely produced by Alex Da Kid, and is set to feature a still unnamed guest artist. Invinsible's title is a portmanteau of "invisible" and "invincible". Grey has said that the album is to be a complete departure from any of her previous work, stating in interviews with Los Angeles Times Magazine and Rap-Up that the album's sound is "...commercial, yet avant-garde...", with "...cinematic beats and atmospheric hooks...", and "...sonically I can tell you that every song sounds different and it’s really diverse, kind of going from cinematic to fun to dark. Alex and I really push each other creatively"