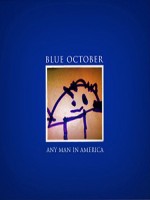 "Any Man in America" is the forthcoming sixth studio album by alternative rock band Blue October. The album was recorded at Matchbox Studios in Austin, Texas between Summer of 2010 and March of 2011, and is scheduled to be released August 16, 2011 through RED Distribution. The album was produced by Tim Palmer, who has previously worked with artists such as David Bowie, Robert Plant, The Cure, U2 and Pearl Jam. The artwork on the album cover is a drawing of Justin Furstenfeld drawn by Tim Palmer's daughter Bluebell, who was three years old at the time.
On, July 25th, 2011, the official music video for the first single, The Chills, was released via the band's Youtube Vevo channel.
Tags: Blue October Any Man in America lyrics, Any Man in America lyrics, Any Man in America Blue October tracklist,