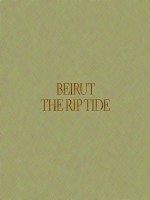 The Rip Tide is the third studio album by Balkan folk band Beirut, to be released on August 2, 2011 on Pompeii Records.
The first single released from the album, “East Harlem,” is actually one of it’s more simple offerings. The song, which features more of Condon’s trembling vibrato than any other track, is the narrative of a star-crossed lover
Some of the tracks, however, feature less melancholia and have a lighter touch. The opening of “Vagabond” almost recalls Feist, with its catchy keyboard arpeggiations. And album closer “Port of Call” begins with the twinkling of a glockenspiel and has a cheery oom-pah-pah brass rhythm.
The album’s title track also feels very introspective as Condon confides “this is the house where I can be unknown, be alone.” The song delicately integrates electro-beeps and synth chords with Beirut’s ubiquitous brass. Condon appears to be in the same mindset for “The Peacock” where Condon bemoans being in “a city where no one hears” and layered vocals repeat the haunting mantra: “he’s the only one who knows the words.”
Released: August 2, 2011
Genre: Balkan folk, Indie pop
Length: 33:11
Label: Pompeii Records