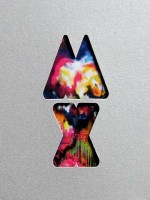 After releasing a color-splashed video for the "Every Teardrop Is a Waterfall," the band will follow with the first official single, "Paradise," due out on September 12. Among the new songs the group played at Lollapalooza were "MX/Hurts Like Heaven," one of their classic anthems, as well as the strummy, U2-like push-pull rocker "Major Minus," the gentle ballad "Us Against the World" and the expansive "Charlie Brown." According to Billboard, the album will also feature the bass-heavy "Up in Flames."