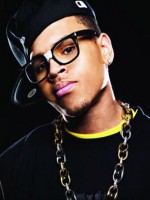 Christopher Maurice "Chris" Brown (born May 5, 1989) is an American R&B singer, songwriter, dancer, and actor. He made his recording debut in late 2005 with the self-titled album Chris Brown at the age of 16. The album featured the hit single "Run It!", which topped the Billboard Hot 100, making Brown the first male artist to have his debut single top the chart since Montell Jordan in 1995. The album has sold over two million copies in the United States and was certified double Platinum by the Recording Industry Association of America (RIAA).