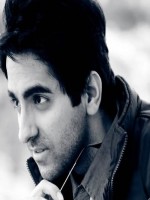 Ayushmann Khurrana (born 14 September 1984) is an Indian television anchor, film actor and singer. In 2012, Khurrana made his film debut in Shoojit Sircar's romantic comedy Vicky Donor, which touched on the topic of sperm donation in India. Upon release, the film was a critical and commercial success, and Khurrana received positive reviews for his performance.