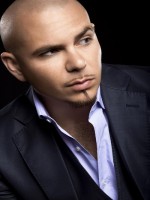 Pitbull, is an American rapper, singer-songwriter and record producer. His first recorded performance was from the Lil Jon album Kings of Crunk in 2002, after which he released his debut album in 2004 titled M.I.A.M.I. (short for Money Is a Major Issue) under TVT Records. Since then, he has released two other albums under the label, El Mariel in 2006 and The Boatlift in 2007.He then released Rebelution in 2009, which included singles "I Know You Want Me (Calle Ocho)" and "Krazy".
Pérez has become a product endorser, representing alongside Drake, Rihanna, and Trey Songz the “So Kodak” campaign for the Kodak brand[8] and embarking on a partnership with the soda giant Dr Pepper as part of the campaign “Vida 23” for which he recorded the song specifically for it that was also featured on his album Armando.
Discography
M.I.A.M.I. (2004)
El Mariel (2006)
The Boatlift (2007)
Rebelution (2009)
Armando (2010)
Planet Pit (2011)