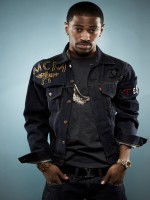 Sean Michael Anderson (born March 25, 1988),[1] better known by his stage name Big Sean, is an American rapper. Big Sean signed with Kanye West's G.O.O.D. Music in 2007, and then in 2008 signed with Def Jam Recordings.
In 2005, Kanye West was doing a radio interview at 102.7 FM. Hearing about this, Sean headed over to the station to meet West and perform some free-style. Initially Kanye was reluctant to hear the emcee, however he gave Sean 16 bars to rap for him, eventually according to Big Sean "As we get to the entrance of the radio station ... we stopped in the middle of the doorway. He starts looking at me and bobbing his head,".[6] He left a demo-tape as well. Two years later, West finally signed Big Sean to G.O.O.D. Music.
Discography