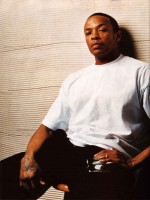 Andre Romelle Young, known by his stage name Dr. Dre, is an American record producer, rapper, record executive, and occasional actor. He is the founder and current CEO of Aftermath Entertainment and a former co-owner and artist of Death Row Records. He has produced albums for and overseen the careers of many rappers signed to those record labels, such as Eminem, Snoop Dogg and 50 Cent.
Dr. Dre began his career in music as a member of the World Class Wreckin' Cru and he found fame with the influential gangsta rap group N.W.A with Eazy-E, Ice Cube, Mc Ren, and DJ Yella which popularized the use of explicit lyrics in rap to detail the violence of street life.