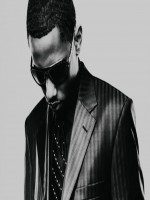 Fabolous, is an American rapper of African American and Dominican descent. He grew up in the Bedford-Stuyvesant neighborhood of Brooklyn, New York. Part of his early popularity arose from his hit single "Can't Deny It" in 2001, from his debut album Ghetto Fabolous. The album reached number-three on the Billboard 200 chart and sold over 1.05 million copies by 2003. His followup album, Street Dreams (2003), produced the Billboard Hot 100 number-four hits "Can't Let You Go", featuring Lil' Mo & Mike Shorey, and "Into You", featuring Tamia.
To date, Fabolous has released five albums, which have collectively sold over three million copies in the United States. In September 2009, the rapper was ranked number eight on MTV's Hottest MC in the Game list