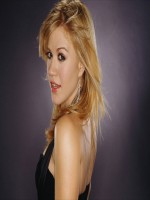 Kelly Clarkson is an American pop rock singer-songwriter and actress. Kelly Clarkson came into prominence after winning the inaugural season of the television series American Idol in 2002. Clarkson released her debut album in 2003, which was a commercial success and established herself in the pop music industry.
The release of its first single, "A Moment Like This" (2002), broke The Beatles' record for the biggest leap to number one, from 52, in the history of the Billboard Hot 100 Chart. After this album she release of her critically acclaimed sophomore album, Breakaway (2004), which had sold more than 12 million copies worldwide and which garnered Clarkson more worldwide success as a pop rock artist.
In a career spanning almost a decade, Clarkson has sold over 23 million albums and 36 million singles around the world, gaining her the recognition as the most successful Idol contestant worldwide.
Tags: Kelly Clarkson lyrics, Kelly Clarkson songs lyrics and video, Kelly Clarkson discography