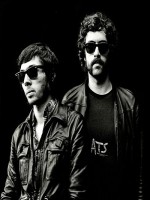 Justice is a Grammy award winning French electronic music duo consisting of Gaspard Augé and Xavier de Rosnay. The duo is one of the most successful groups on Ed Banger Records and is managed by the label's head, Pedro Winter. Justice is known for incorporating a strong rock and indie influence into their music and image.
Their debut album † was released in June 2007 to critical acclaim. The album was later nominated for a Grammy Award for Best Electronic/Dance Album and came in at number 15 on Pitchfork's Top 50 Albums of 2007 and number 18 on Blender's "25 Best Albums of 2007" list. It was nominated for the 2007 Shortlist Prize, losing out to The Reminder by Feist. Their remix of the MGMT song "Electric Feel" won the Grammy Award for Best Remixed Recording, Non-Classical in 2009.
On 11 March 2011 the band put up on their official Facebook page what seemingly is a new album cover with no description. On 14 March 2011 they confirmed that they are working on a new album, and the first single entitled "Civilization" was released on 28 March 2011. The band confirmed that their second album "Audio, Video, Disco" will be released on October 25, 2011.
Genres: Electro house, glitch
Years active: 2003–present
Tags: Justice Lyrics, Justice Band Lyrics, Justice French Band Lyrics, justice band songs, justice band songs, Video and Lyrics, Justice Discography