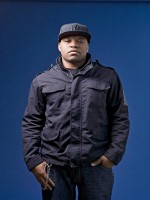 Torae is an American rapper. Torae has gained recognition for dropping several notable efforts, particularly his raw joint album with boom-bap beatsmith Marco Polo. For The Record hits shelves and provides the MC with a chance to shine on his own. Torae won't be assisted by any other rappers on the project, he has received some pretty significant help in the production department. And it's significant because of who he has supporting him DJ Premier, 9th Wonder, Pete Rock, Khrysis, Marco Polo, Large Professor, and Diamond D, among others.
Genres: Hip hop
Years active: 1996-present
Tags: Torae Lyrics, Torae Debut Album, For The Record Torae, For The Record Torae Debut Album Lyrics, Torae Discography