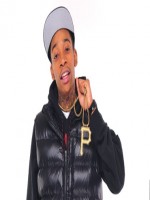 Wiz Khalifa, is an American rapper. He released his debut album, Show and Prove, in 2006, and signed to Warner Bros. Records in 2007.
He is also well known for his debut single for Atlantic, "Black and Yellow", which peaked at number 1 on the Billboard Hot 100. His debut album for the label, Rolling Papers, was released on March 29, 2011.
Tags: Wiz Khalifa Lyrics, Rapper