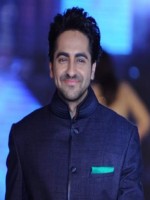 Music
Ayushmann has sung two songs for Nautanki Saala. He also composed both the tracks. There are total 8 tracks in this film.