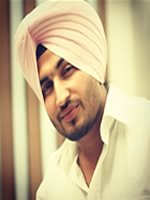 Jassi Gill is an Indian Singer and Actor of Punjabi origin. He was born in Jandali village near Khanna, Ludhiana. He rose to instant fame with his hit song "Chudiyan" from his debut album Bachmate. In 2014 he will be making his debut as an actor in Punjabi Cinema with three movies, a first for any actor.