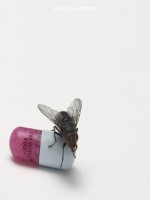 I'm with You is the forthcoming tenth studio album by American rock band Red Hot Chili Peppers. The album will be released by Warner Bros. Records on August 26, 2011 in several European countries and on August 30, 2011 in the United States. Produced by Rick Rubin, it is the band's first studio album to feature guitarist Josh Klinghoffer, following the departure of John Frusciante in 2009, and is their first since Stadium Arcadium in 2006, marking the longest gap, to date, between studio albums. The album's first single, "The Adventures of Rain Dance Maggie" was released to radio on July 15, 2011, three days earlier than expected due to the single leaking.

Regarding the album, vocalist Anthony Kiedis noted, "there is no question – this is a beginning," with drummer Chad Smith stating, "this is a new band. Same name, but it's a new band.", while Flea stated, "it’s just like a very … meaningful and rejuvenating rebirth for us."