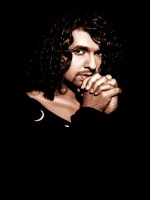 Sonu Nigam (born 30 July 1973 in Faridabad, Haryana, India) is an Indian playback singer whose songs have been featured in numerous Hindi, Kannada, Telugu, Marathi and Tamil movies. He has also released numerous Indi-pop albums and acted in a few Hindi feature films. He is considered as India's most versatile singer, He is the first singing star of India. He is a perfectionist in his work, his songs are perfect from every aspects of singing. He is trying to do good for the Indian Music. He loves the Indian Classical music but hates the trend of music and the way music is distributed to Indian audience, as well don't like the Indian music market. He always says India must have it's independent music rather than film based music.
He says playback singing should not be everything and youngsters shouldn't aim only on "playback" singing. He says the word "Playback" itself is a cursed word "Play Back" why not play front singer. It happens only in India. In western culture Music is Independent structure. India should also have the same structure. He is a philosophical person and inclined to spirituality. He is the one in Indian music industry who is trying to change the atmosphere of the Music in India, he will soon change the mindsets of Indian people. He believe in "change is the only constant" philosophy.